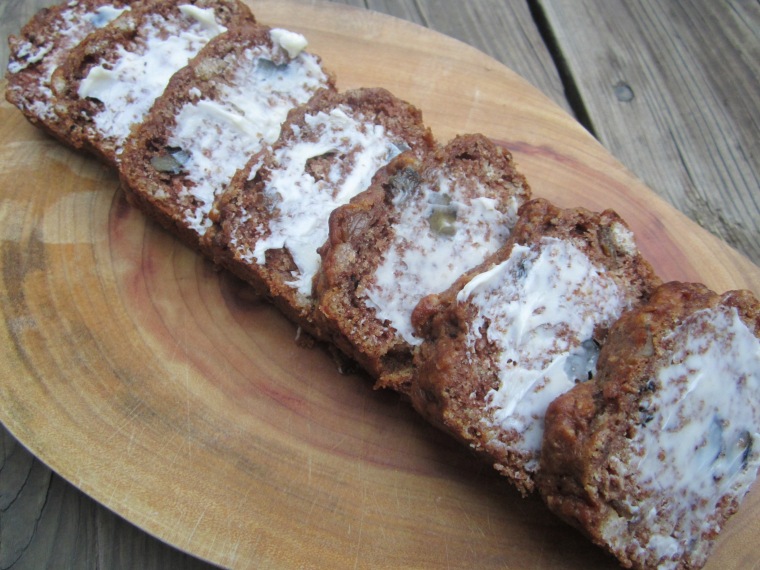 It’s the start of wild apple season in Ontario. I know this because along my dog-walking trail, there’s a huge, ancient, completely untended apple tree that has already started dropping its bumper crop. It seems early and perhaps that’s due to the extended drought we’ve had this summer. In many regions of Ontario, July 2012 was the amongst the driest since record keeping began.

The apples are small and gnarly and tart. They’re just starting to turn red. And they’re falling to the ground, laying about willy nilly. The branches are drooping with apples. I picked a few, brought them home and tried cooking them. Miraculously, they’re some sort of cooking apples. They make the most fantastically flavourful applesauce. I’m going back for more. I love foraging. Wild leeks, wild blueberries and wild apples; these are a few of my favourite things.

And that brings me to today’s post – Vegan Applesauce Loaf. During the Great Depression and after both World Wars – a scarcity of sugar, eggs, milk, and butter meant that creativity in the kitchen was a necessity. Plenty of resourceful cooks came up with new ways to create cakes, often sweetened and flavoured with things like raisins and applesauce and cinnamon to offset the lack of sugar. Applesauce was a both useful way of preserving apples and of producing moist cakes without butter and eggs.

A few months ago, I found an old recipe in my recipe box entitled Dutch Applesauce Cake. I was having a friend over who is vegan so I played with the recipe and came up with this version. You won’t notice the missing egg or the fact that it’s made entirely with 100% whole-wheat flour.  It makes a perfect loaf or better yet, if you have mini loaf pans – makes 3 small loaves (depending on the size of your tins). I love mini loaves because they cook faster, are great for sharing, and are so nice to pull out of the freezer when you need something fast. I like it buttered which I realize defeats the whole purpose of its being vegan. However, you could easily serve this plain or with nut butter and jam.

Bake until a skewer comes out clean, approximately 25 minutes for small loaves – slightly longer for a bigger one. Let cool on a wire rack and serve it any way you like it.

4 thoughts on “the joy of foraging”